Is remote work experience worth it for young people trying to break into journalism?

While some internships were cancelled thanks to the pandemic, many young journalists have instead been thrust into the ‘new normal’ media landscape: the ‘remote work’ experience. Amber Sunner talks to the people who have had to adapt as well as those who running journalism placements.

Picture a newsroom and you probably imagine an office with a buzzing environment with journalists chatting on phones and bantering with each other. There may even be shouting when a breaking news story breaks. With newsrooms closing their doors because of the Covid-19 pandemic, many young journalists hoping to break in have lost the opportunity to experience the buzz and adrenaline rush in a real newsroom after years of studying.

As Covid-19 put the nation on standby a handful of journalism trainee schemes were postponed including the BBC Journalism Scheme and the Sun News Academy. However, some organisations made their opportunities remote meaning that young journalists were able to carry out the work from home. Armed with their trusty laptops, true grit and their sometimes wavering determination they reinforced the precedent that journalists never give up.

One of the young people who had to make this change is Sunita Ghosh Dastidar who is currently gaining experience out of the comfort of her own home at BBC Digital Planet.

Sunita said that she had been sitting in on studio recordings through Facetime and had her meetings over Zoom.

“Usually these would be in-person meetings but are now online due to Covid-19. The team has been trying their best to include me as much as they can from a distance.”

Sunita hopes that when lockdown is lifted fully she will be able to meet the producers of the programme and other programmes within the science unit or the World Service.

The realities of remote work lie with only having virtual contact with your team; a more impersonal way of connecting in what was usually a very friendly industry before the pandemic struck. The detached touch of Zoom, along with a temperamental WiFi connection, will hopefully be a momentary solution in the practice of journalism. 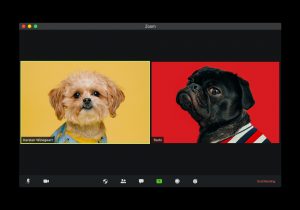 The Press Gazette reported that against the odds some trainee schemes are continuing. These include The Times and Sunday Times graduate scheme which begins in September and The Daily Mail’s training program will also go ahead uninterrupted.

Mark Hudson from News UK says that the organisation chose to continue their work placements despite lockdown because they didn’t want their trainees to lose the opportunity to learn and develop their skills.

“Even though it’s not ideal in the sense that when you’re first starting out it’s much better to be sitting next to an experienced person, but all of our trainees have adapted well,” he says.

Hudson says he didn’t feel as though the young journalists were falling too far behind, if at all, because of their jobs turning remote. He explains it is more of a case of them missing out on the “buzz” of the office environment.

“I think it’s the office jokes and the camaraderie and the after-work drinks. Those are the bits that when you’re first starting out they’re amazing; the things which make the job fun.”

He adds that a lot of his own learning came from absorbing the atmosphere of the newsroom. Newsweek has pushed back their trainee scheme which was due to start in September to next year.

Isis Flack is completing remote work experience at the City AM newspaper in London.

She says that the home environment she is working in made her feel more comfortable completing the work. It also removed the stress of commuting.

“I imagine I would have felt like a fish out of water and very intimidated if I worked in the office.”

Isis says that she has “enjoyed” the experience so far as it helped her keep proactive during a government lockdown. “I also haven’t been subjected to the cliché work experience task of making the whole team teas, which is a plus,” she says.

Some organisations like The BBC and The Guardian have put some of their placements on hold. A BBC spokesperson told PressPad: “As a result of the coronavirus pandemic, and the associated disruption this has caused, we have understandably had to pause some work experience placements until spring 2021.”

Joseph Harker, from the Guardian,says their Positive Action Scheme was postponed because there was little to do in the office due to the reduced number of journalists in the building.

“It wasn’t worth having someone in the building for two weeks and forgo them the interaction with journalists or see the production process and the editing process first-hand.”

“They can’t sit with editors and learn and they can’t talk to journalists in the same way that they could before,” he adds.

Joseph explains that The Guardian is hoping to run the Positive Action Scheme next year and that there may be a virtual experience coming soon but these processes are being worked out.

The experience that young journalists would get in a newsroom full of trained industry professionals is hard to replicate via conferencing calling. While some organisations are trying to uphold these vital connections through different methods, young interns are essentially missing having a trained journalist sat adjacent to them. Rob Bailey, Director of Education at the University of Kent’s Centre of Journalism says remote work experience ultimately makes it harder for students to make the kind of strong impression that could lead to job offers in the future.

“The obvious drawback is that students don’t have a chance to gel with the team and see how work is structured in a newsroom,” he says.

Ultimately, the downside of remote work experience is the reduced ability to forge new relationships with those around you. Journalism networks can be key to your progression in the industry as PressPad’s Nicola Slawson wrote in an article about her networking masterclass. The days of coffee-dates to network – a key practice for those starting out in the industry are now long behind us, but there is obvious anticipation in the hope they will return.

Grace Pritchard did not want to take the pause in her career which would have been caused by a lockdown. She instead sent emails to editors asking for work experience.

Throughout lockdown she has been given work experience at Yorkshire Bylines and an internship at talkRadio. In fact, Grace believed lockdown has helped to propel her work.

“My hopes of getting some broadcast experience were slim at the beginning of lockdown but I’ve found that I’ve actually been able to do more due to the restrictions.”

She explains this was mainly due to the ease of being forgotten about during hands-on work experience. Grace says that lockdown has allowed her to get “stuck into some real work”. Her experience has not been without difficulty, however.

“It has been harder to access some local stories than usual, these restrictions have forced me to try other styles of writing, such as opinion pieces on more personal topics which I’ve really enjoyed exploring.”

The fact that organisations are looking to adapt their opportunities because of the pandemic, such as the Guardian’s Scott Trust bursary scheme, is encouraging. In addition to this, The Times and Sunday Times are looking to make up the loss of their summer interns by offering paid internships over the Christmas breaks if social distancing is eased, according to the Press Gazette.

I believe journalism will recover but not without adapting its practices to the situation that is unfolding. Be it through socially distanced interviews or the rise of remote work, journalism is always needed in the modern-day. It still remains the job of the journalist, regardless of a pandemic, to deliver the facts and convey the truth. Journalism will leave this pandemic bruised but journalists would have undoubtedly learnt a lot during this global crisis.

The past few weeks have seen journalism bearing a large brunt of the impact of Covid-19, and it’s terribly sad to see. We, at PressPad, stand in complete solidarity with the incredible journalists who have lost their jobs. We see you.