PressPad’s co-founder Laura Garcia gives advice on how to understand the game of hiring when it comes to journo jobs. 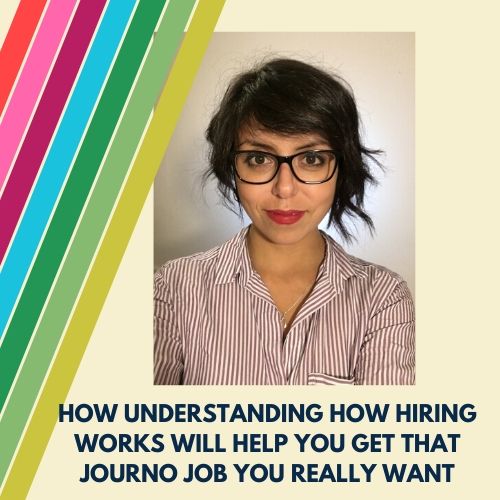 Getting a job in journalism already felt like a hard thing to do before 2020 decided to surprise us with a global pandemic. We’re all stuck at home, or less free to move around; universities have moved online and work placements and internships have been cancelled for health and safety reasons.

Amidst all the madness and as we try to keep each other safe, what most of us have more of right now is TIME. And time is just what you need before you start applying for your first journalism job.

When I worked as a lecturer at the University of Kent’s Centre for Journalism (shout out @cfjkent) part of my job was supporting my students as they moved into the industry. “Employability” became my thing. Through dozens if not hundreds of CVs, Cover Letters and interview prep I learnt that there are 5 things you can work on to improve your chances. The first three apply to all jobs, any job, regardless of what you’re applying for. They are things you should be thinking about all the time. The last two depend on the job you’re actually applying for.

5 things you can do to improve your chances of getting that journo job you really want:

The first step – understanding how the hiring process works – is the most important. It has nothing to do with CVs, or cover letters, or interviews. It all happens in your head. Applying for jobs is a full-time job: it can be tiring, frustrating, demoralising, confusing etc. But if you understand the process underneath, if you flip that switch, then you’ll be better prepared to tackle it.

The job market is changing and more importantly, has radically changed since your parents or older lecturers got into it. Like everything this has its pros and cons but the most important step is understanding that things HAVE changed. Think about it. Flexible working wasn’t a thing until very recently. There were less women in newsrooms, women were the primary caretakers (still are a bit)  and male parental leave was definitely not a thing. If the industry itself has changed, why wouldn’t the hiring process change with it? The bar has been raised and it’s been set pretty high.

Baby Boomers had, for the most part, a really linear work trajectory. You get a first job, grow in the company, maybe change jobs a couple of times, but that was it. The work trajectory of Millenials, GenX, GenZ (called Linksters?) is really different. Think of it more like a pinball making its way up, zig zagging, bouncing off a wall, and eventually reaching the top. Changing jobs is normal, almost expected.

The skills that employers expect of us are also different. More of us are going to university, so a degree alone won’t stand out like it did 40 years ago. Companies themselves are more diversified so they need people with a mix of skills they didn’t need before. Think about journalism: before a tv news programme had the budget to hire an on screen reporter, a makeup artist, a sound engineer, a camera operator, a video editor and a graphics designer. Now, many journalists are self-shooters, they do their own makeup, cut their own work, tweet about it, go on the radio to talk about it and multitask.

When it comes to the hiring process there are three main steps. I’m obviously overgeneralising, but as a rule of thumb this is kinda how it works.

The first cut (of three) is the deepest

Application – getting your application to stand out. This first step is normally done by someone in HR who isn’t a journalist or works in a newsroom. Busy news editors or managing editors rarely have time to read hundreds of applications. Their only job is whittle down hundreds of applications into 30- 50 that someone else will read. This is a hard job and studies show that recruiters spend less than 10 seconds deciding whether your CV goes in the maybe pile or in the bin. Sometimes, it’s not even a person – it’s an algorithm scanning through applications online.

The second stage is where your CV and cover letter lands in the hands of someone who is actually doing journalism. Your online portfolio is key here – showing off the best of your work and making it easy to find. The third step is the interview process. Once you’re in the door it’s all about personal skills, fitting in with the team, preparing and even doing trial shifts.

We’re not saying the process is fair or how it should be. There are organisations all over trying new ways of doing things: applications without CVs based on tasks, or without names, where you don’t have to disclose your gender or sexuality to avoid bias. HOWEVER, while the industry changes this is still a really good way of thinking about how you apply for jobs.

This blog is part of PressPad Remote, a programme of activities to support aspiring journalists during the pandemic. Join our next masterclass with Laura, where she will talking about how to write a fantastic journalism CV. Be sure to keep up to date with PressPad by subscribing to our newsletter here.